Alpiq, one of the leading energy companies in Switzerland, went further and teamed up with H2 Energy, automobile company Hyundai and the Association ‘H2 Mobility Switzerland’ to create a market for the green hydrogen produced near its Gösgen run-of-river hydropower plant. Two newly formed joint ventures, HydroSpider AG and Hyundai Hydrogen Mobility are working in partnership to sustain an ecosystem starting with the hydrogen electrolysis facilities and going all the way down to the end users: freight transporters.

Launched in 2019, HydroSpider AG will produce, store and supply green hydrogen for a fleet of fuel cell electric trucks that will eventually include 1600 vehicles in 2025. Owned by Hyundai Hydrogen Mobility (HHM), the heavy duty trucks will be lent to transport and logistics companies in Switzerland to promote hydrogen-powered mobility.

This project uses surplus hydropower supply to give a third life to the Gösgen hydroelectric plant: originally built in 1917, it was restructured at the end of the 1990’s and is already used for a power-to-heat facility. Run-of-river plants like Gösgen are used in Switzerland to provide consistent electricity, since hydropower plants with storage are turned on and off to deliver power during peak times.

According to the International Energy Agency, hydrogen could supply up to 8% of overall global energy demand by 2050, with more recent studies suggesting it could be even higher. By making use of hydroelectricity and encouraging hydropower development, energy companies can ensure that this new source of energy remains sustainable from production to consumption. 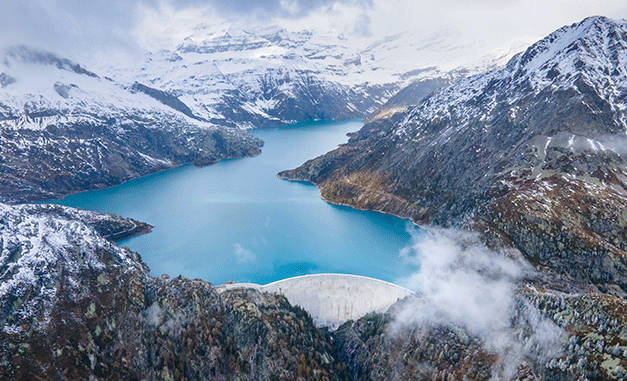 Snow experts are coming to the rescue of hydroelectric companies

Satellite images can now tell you (almost) everything about your reservoir